These gluten free quinoa corn tortillas are easy to make and make gluten free tortillas guilt free! Pliable and filling, these will become a favorite. 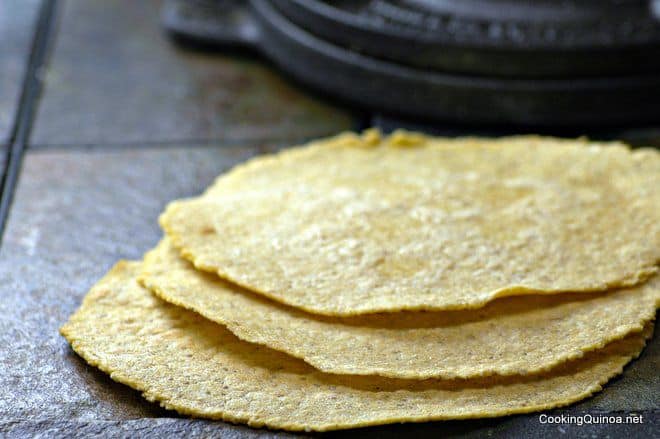 I've been meaning to post these quinoa corn tortillas for what seems like forever now. This is a recipe I first made in January and they have become quite the staple at our house.

Why add quinoa to corn tortillas? For me, the motivation was two fold. First, I've found the addition of quinoa makes them a little more pliable and moist. Second, (and what motivated me in the first place) is that both the boys will happily eat nothing but tortillas (with Earth Balance) and fruit and call it a meal. Obviously this is less than ideal, but the addition of quinoa makes me feel a teeny bit better about it when it does happen.

In the last week, other than recovering from being sick, I've been doing a bit of an experiment. I read the book Wheat Belly: Lose the Wheat, Lose the Weight, and Find Your Path Back to Health in December and it really captured my interest. Basically, the book talks about how the wheat that we eat today is very different from what people ate even 100 years ago and this difference is causing problems for many people. (I'll try to talk more about the book in a future post for those who are interested.)

Although I have no known gluten intolerance, I had to wonder - would I feel better eating gluten free? Would it help me lose weight?

As interesting as the idea was, I have been a bit of a non-starter with testing the theory until the last week. Why? Frankly, I love my bread and the idea of giving it (along with the occasional Gardein product) up was overwhelming.

As in more overwhelming than going vegan ever was.

Finally, after feeling like crap for the better half of a month, I got into the "I'll do anything to feel better" mode and decided to give it a try!

You know what? It hasn't been half bad and I haven't felt a bit deprived. I've made regular (not corn) tortillas, gluten free pizza crust, garlic bread sticks, two different kinds of cookies for the boys and of course these quinoa corn tortillas!

So - going GF hasn't meant giving up bread at all. (In fact - I may be eating more - I'll have to watch that!)

And, its all been surprisingly good! Does this look like deprivation to you?

Do I feel better gluten free?

I think it is too soon to tell especially given how sick I've been.

First, its only been a week and most experts say that it can take up to a month for someone who is merely gluten sensitive to start to tell a difference in how they feel. I will say that I haven't had any cravings of any kind and its been very easy to eat clean the last week.

Secondly, I'm feeling a lot better right now but it could be that I'm just returning to normal. Oh, and the hubby insisted I take the week off and recuperate so I have really been taking it easy, reading books and enjoying the boys.

So, the jury is still out but I'm planning on sticking with it for at least another month. If nothing else, I'm becoming a half decent gluten free baker. 🙂

Something interesting did happen a couple of days ago and I'm not sure what to make of it. Maybe you can help me!

I was making cookies for the boys and using a recipe that called for Almond Meal and ended up being short by about ¼ cup. The easy solution was just to substitute wheat flour. The kitchen was a mess at the time because I'd been cooking half the day and I ended up knocking the open bag of flour onto the counter, spilling it everywhere. Luckily it was right next to the sink, so I just used my hand to scoop the flour into the skin. About that time, I started sneezing so my floured covered hand went up to my face in a natural reaction.

About 30 minutes later, I was sitting outside with my husband and he asked me if I was feeling ok. At first I wasn't sure why he was asking but then I noticed my face was hot and my hand was itchy. Both my face and the hand I used to clean up the flour were bright red, a little swollen and itchy. My other hand was not effected.

An hour later I was just fine.

I have no clue if this had anything to do with the flour contact or if it was something else all together...but it did make me wonder if maybe I'm more sensitive than I thought. Of course, I'm sure it could have been a number of other things.

Has this ever happened to anyone else and if so was it an allergic reaction to gluten or something else? 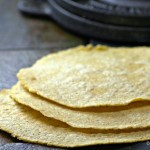 If using a tortilla press, I recommend cutting circles from a large plastic zip lock bag and lining your press with that. IMPORTANT NOTE: If you are strict gluten free (as in celiac), please do make sure that you buy gluten free masa harina. Although the product itself is naturally gluten free, many companies (like Bob's Red Mill) process their standard masa harina in the same facilities in which they process wheat. Obviously if you are highly sensitive this is something you need to avoid. Luckily, they do offer a gluten free option which specifically states "Gluten Free Masa Harina".

More recipes you may enjoy