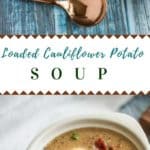 This Creamy Cauliflower Potato Soup is a deliciously wholesome alternative to potato soup made without milk or cream. The carbs are kept in check by adding cauliflower, but I promise you won't miss anything! This comforting soup is topped with sour cream, chives, cheese, and bacon, for all the flavors of loaded baked potato soup you love.

If you love creamy soups packed with flavor, you will fall in love with this Cauliflower Potato Soup.

It manages to achieve rich and creamy status without a drop of heavy cream or milk.

And, of course, there are toppings.

What better to top a Cauliflower and Potato Soup than crispy bacon, creamy sour cream, gooey cheese, and a sprinkling of chives?

It is a total flavor bomb that you don't want to miss!

Absolutely! Omit the bacon and instead saute tempeh bacon in your stockpot. You will likely need to add more olive oil when you go to cook the onion and garlic.

Proceed with the recipe as directed and top with dairy-free sour cream and vegan cheese.

Can I Use Frozen Cauliflower Instead of Fresh?

Yes! This is one case where frozen cauliflower will work just as well as fresh.

How do you thicken cauliflower soup?

The potatoes and cauliflower are enough to make this soup thick enough.

If you would like it to be thicker, I recommend using ¼ teaspoon of xanthan gum or ½ tablespoon cornstarch whisked together with a little water.

Should you peel potatoes for potato soup?

For this soup, I do recommend that you peel the potatoes.

As an amazon associate, I earn from qualifying sales.

Leftovers will keep in the refrigerator in a sealed container for four days.

You may freeze this cauliflower and potato soup recipe for three months. Let the soup cool and place in freezer-safe containers, being sure not to overfill them.

How to Make Cauliflower Potato Soup

First, start by heating a stockpot or dutch oven over medium heat.

Place your bacon in the pot and cook until crispy.

Add the onions, garlic, salt, and pepper to the bacon fat.

Cook for about 10 minutes until the onions are tender.

Add the potatoes, cauliflower florets, and broth to the pot.

Bring to a boil over high heat. Reduce the heat to medium and cook, occasionally stirring, until the potatoes are soft. Depending on the size of your potato chunks, this should take about 20 minutes.

Puree the soup to the desired consistency in a blender or immersion blender.

Taste and adjust the seasoning to your liking.

Don't forget the toppings! You can have the best cauliflower potato soup recipe without toppings! 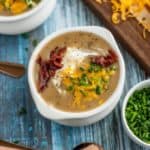 To make this Cauliflower and Potato Soup vegetarian, use vegetable broth, and tempeh bacon.  Coconut bacon would be great too!   Lightly adapted with permission from Healthyish by Lindsay Maitland Hunt.